The language barrier is strong here. I feel completely ashamed at my appalling lack of Spanish. I learnt French at school and not a single word of Spanish. First thing I did this morning was organise a Spanish lesson with the hostel who employs this lovely Ecuadorian woman where we went over some basic phrases and useful verbs, then I went for a wander round the town. I visited about 10 different electronic shops trying to find an England to America plug adaptor (plug sockets in SA are the American 2 prongs), and my communication got steadily better at each shop: foreshadowing my year here I hope! In the first shop I was inelegantly miming, using my fingers, a plug with 3 prongs entering a plug with 2 prongs, not the most efficient method at getting my point across but eventually she understood, told me she didn’t have one and pointed in a very general direction saying something in Spanish that for all I know could have been “head that way, turn left, right, left again, travel South then it’s 16 steps at 23 degrees West and learn Spanish” because I was walking for ages in the direction she’d pointed and came across no more shops. Anyway, found one in the end and again same story. A couple of shops later I’d searched my entire brain for any Spanish I could possibly use, and when I got to the next shop, managed to ask the guy if he could tell me what this adaptor is called en Español. He kindly told me (adaptador de tres a dos, annoyingly simple, but if you don’t know, how would you work that out), and on my walk to the next shop I was repeating this phrase out loud constantly so I wouldn’t forget it, and in the next shop I walked in, asked in Spanish for this adaptor (a full sentence I might add) and the woman said ‘si’ – fortunately – so I paid for it and that was it. Mission completed I just headed back to the hostel and got out my Spanish notes to revise, feeling ashamed it had taken me so long to complete such a simple task.

Whenever I have to admit I don’t speak Spanish, I feel like people look at me in disgust. Being one of the most widely spoken languages in the world, I expect most locals are used to foreigners being able to speak at least a bit of Spanish. I wonder if English people do that to people who travel to England and don’t speak English.

So I landed in Quito last night at midnight after leaving San Francisco at 10:40am, went through customs easily and picked up my bag. You can get a 90 day visa for Ecuador free on arrival. I’ll be getting a work visa via the Universidad Central del Ecuador eventually so I can stay for the year. Then as I was leaving baggage claim a Spanish/Italian couple came up and asked me if I was heading to the city centre and should we share a taxi, which thirded my taxi bill and I was happy for the company and conversation. Plus, they could speak Spanish making it very easy on my part, all I did was stand around staring politely at people as they conversed and organised everything and I just got into the taxi when I was told to. Easy.

I am currently planning my next couple of days.. There’s been a minor cock up with regards to Heather’s and my arrival at the station (Heather is the other student on the same placement year as me, and she studies Zoology at Manchester Uni), and we may have an extra couple of weeks to play with before we go. If that’s the case we’re going to do something fun like go to Peru. We shall see what happens. If not, I leave Quito on Friday to Coca.

It’s quite strange being back in a hostel environment. I’m staying at The Secret Garden hostel in Quito (WOULD 110% RECOMMEND) in an 8 bed dorm ($10 a night), and when I was shown to my room last night at 1:30am, the night manager brazenly walked into the dorm in front of me and turned on all the lights in order to show me my bed. There were a few annoyed blinky eyes peering at me from under various covers and I looked back sheepishly then literally crawled (I say crawled, I was top bunk and there was no ladder, so actually a more accurate description of me getting into bed could be spider-crawling, or rock climbing) into bed in my aeroplane clothes and played soduku until I drifted off to sleep. Then today one of the first things I did was buy a padlock and key so I could lock away my valuables. I feel too clean to be staying in a hostel. I’m surrounded by lots of hardened backpackers who have scraggly, yellowed clothes, dreadlocks, blotchy tans and hiking gear. Give me a month in the rainforest and I’ll fit right in, I’m sure. Right, signing off. Buenas Noches.

**Featured picture is my view as I was writing this article. 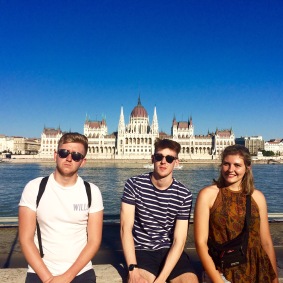 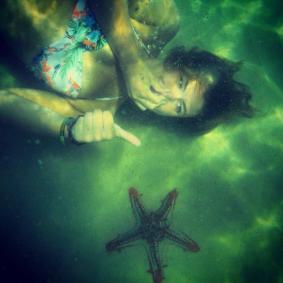 Looking out over espanol 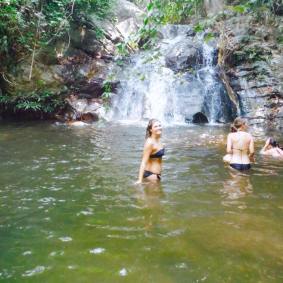 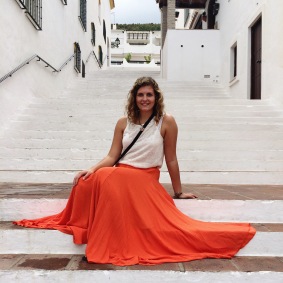 Biking up the Vietnamese coast 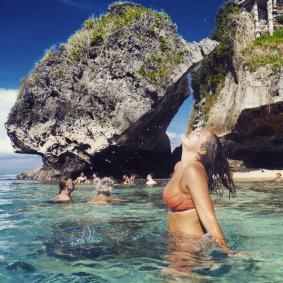 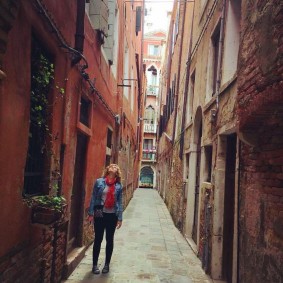 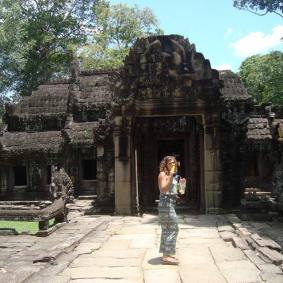 Shots in the rainforest 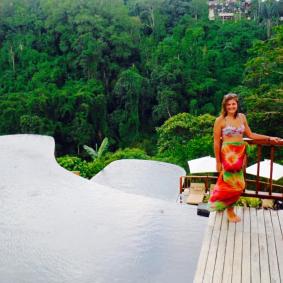 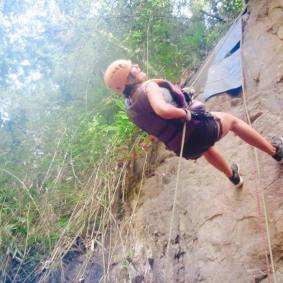 So much fun – Vietnam

On top of Mount Batur